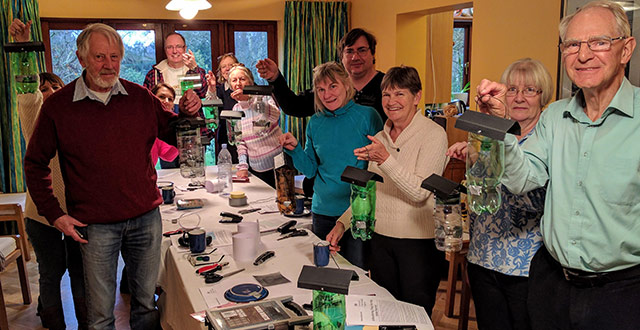 On the morning of Saturday 11th February the branch held an Asian Hornet Workshop.

As a result of last year's arrival of the asian hornet to our shores, and the possibility that it may be back, the workshop was held to allow our members to get together and make up the trap recommended by the NBU.

This trap is meant for monitoring in areas where the Asian hornet is not yet established and the recommendation from the NBU is to hang the traps around the apiary in mid to late February to trap any overwintering queen hornets.

Later in the season, the trap can be modified by re-fitting the bottle cap with a 9mm hole drilled into it. This allows the Asian hornet to enter but not European hornet. 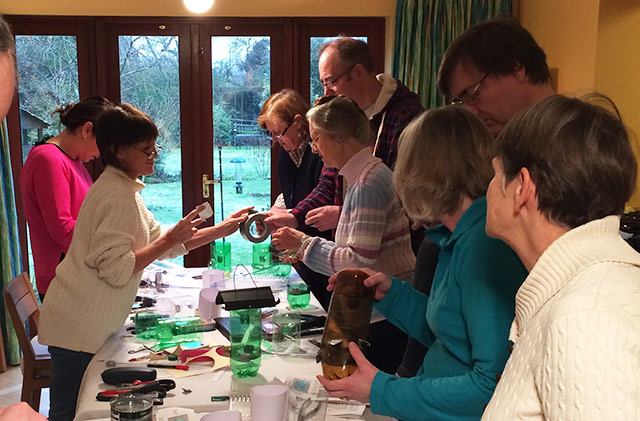 A 5mm escape hole can also be added above the mesh that will keep asian hornets in but allow the escape of smaller insects.

The session started with Rowan giving an overview of the steps he took to build a trap, plus the workarounds that were discovered to problems that occured during its construction. The construction process was then repeated and followed by all participants until everyone had made their own trap.

After the construction session, Margaret Holdsworth supplied refreshments and reviewed possible options to use for bait. The addition of cider vinegar to baits, which has been a successful additive to wasp baits, was mentioned and was known to put honey bees off the lure.

French beekeepers often use a mixture of DARK beer and sugar for same purpose. Other effective baits include sweet mixtures of wine, sugar, cassis, and water. You can also buy proprietary brands of hornet (wasp) trap bait from many garden centres and DIY stores. At the height of the beekeeping season, when predatory worker hornets are seeking high protein foods, consider adding raw meat or fish to the bait mixture. 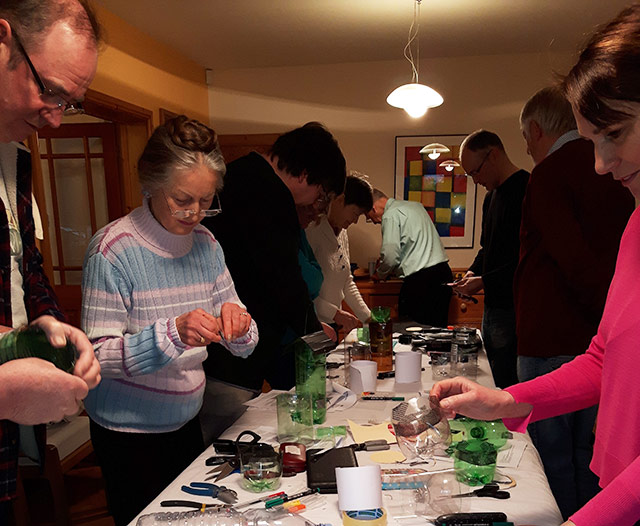 Spring: sweet baits should be used
Summer & Autumn: sweet baits again, but with the addition of protein (fish or meat).

In areas where the Asian hornet is already established a trap without mesh can be used.
Experience in France has shown that a trap already containing some Asian hornets is even more attractive to other Asian hornets but other insects are deterred from entering.
French beekeepers will therefore sometimes ‘bait’ a trap with a few Asian hornets. Be warned that an overfull or 'stale' trap is not an attractant.

Remember, this hornet is not yet established here and the primary purpose at the moment is to monitor and report!

If a suspect Asian hornet is captured it is best to enclose the whole trap in a plastic bag and place in a freezer for 12 hours before removing the insect.

Thanks go to Gillian Berridge who supplied the lovely cakes, Margaret and Dick Holdsworth for hosting the session and Rowan for sourcing the required materials and getting things started.