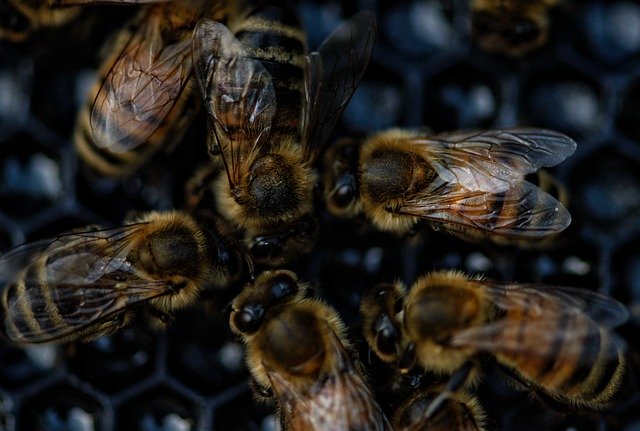 In beekeeping circles June is often referred to as the ’June Gap’. The gap referred to relates to the relative absence of forage at this time of the year as the Spring blossom and tree nectar and pollen has largely come to an end.

For beekeepers, this means that with our hives fast approaching a maximum number of bees, a drop in availability of nectar, combined with the fact that we may have removed some of their reserves for extraction, we need to be especially vigilant when doing routine inspections, to ensure that there are sufficient stores to enable the bees to continue to feed their young, themselves and the queen. Finding combs with bees head down in the cells because they are starving, is not a pretty sight.

This Spring has been one of the sunniest and driest on record which has been good news for the bees as they have been able to be out and about foraging almost every day in April and May. The downside is that when there is no rain, nectar can be withheld by plants conserving their own liquid levels, the upside is that nectar which is produced is often higher in sugar levels, thus making every nectar trip more worthwhile for the bees.

Those of us with our hives in urban areas may find little evidence of the June Gap as gardens planted with a variety of flowers can fill the space, also most of us are still able to water plants (until a hosepipe ban is instituted!), but those whose hives are in rural areas may find the June Gap more of an issue. However, it does seem that more wildflower meadows are around, and currently fields of buttercups are a delight to the eye, and hopefully the bees.

With lockdown and social distancing many of us have become familiar with using social media to keep in touch and in May the Association held its first Zoom meeting on our regular third Wednesday of the month. Feedback from participants seemed to be positive and topics ranging from swarm prevention to storing supers to avoid them becoming mouldy or infested with wax moths were covered. It was great to see some of our newer beekeepers and even prospective beekeepers participating, and as a result I think one of the new beekeepers was later provided with a swarm to start beekeeping. If you can, please join us for another Zoom meeting on the third Wednesday of this month, either posing any questions you may have or just participating in the conversation.

One of our beekeepers in Brinklow, Tim Riggs, sent me a link to an online meeting of his sister’s beekeeping group in North Carolina, USA where a beekeeper and researcher, Anya McGuirk, was giving a lecture on her findings recording both temperature and bee sounds within the hive. Did you know that within 20 minutes of being made queenless bees will themselves start ‘piping’ at the same frequency that queens do when searching out a rival? Sound, as has been known for some time, can also indicate queenlessness, with the sound frequency going up when queenless, and returning to a steady hum when requeened.

Also, measuring hive temperatures gave a clue to why one hive was doing poorly in an apiary when another was thriving - robbing. The temperature in the poorly performing hive dropped at the same time as it rose in the strong hive. Perhaps this happens more frequently than we realize. Also, bees do seem to ‘sleep’ between about midnight and 6.00am….

If you are interested, this is the link  and look for the April meeting. It is quite long but contains some fascinating information. We know comparatively little about bees and this adds to our knowledge.

Despite requests, the only contribution I have had from anyone to liven up this newsletter has been from Maurice with this latest limerick:
A beekeeper who lives up in Settle,
Kept bees' in some hives made of metal;
He kept several stocks,
Near the canal by the locks,
But the only forage was nettle.

The treasurer of Rugby called Sam,
Moved hives to her apiary in a pram;
The bees' worked all night,
With head torches for light,
So Sam could have honey not jam.

I am sure some of you must have stories to tell, or want to challenge Maurice’s mastery of the limerick. Please don’t be shy, send me your contributions.