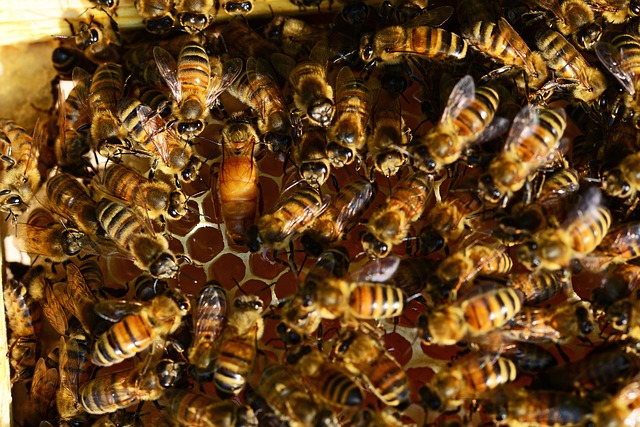 Scientists have identified the first molecular mechanism that describes the link between a lack of ovary activity in adult worker bees and the presence of the queen.

Honey bees are categorised as a eusocial species which is the highest level of social organisation in animal society. A primary characteristic of a eusocial species is that a division of labour exists between reproductive and non reproductive groups. This division results in specialised behaviours within the group. In a normally functioning colony of honeybees the queen is the sole fertile female whose role is to lay the eggs for the colony. The males of the colony are fertile and only exist to mate with queens and do no other labour. The majority of the colony are unfertile female workers who perform all other tasks including tending of the brood and foraging for the resources needed by the colony.

The workers have ovaries but their ability to lay eggs is suppressed by the existance of pheromones produced both by the brood and the queen. The loss of a queen and her queen mandibular pheromone (QMP) is one reason why we sometimes experience the problem of laying workers. This situation results in an increase of unproductive drones and a steady reduction of workers as their population dwindles. This situation is the beginning an effective death knell for the colony.

While it is known that QMP is involved in the suppression of a worker's ability to lay eggs, how this works is not well understood. The precise mechanism has now been identified by scientists working at the University of Ontago. Elizabeth J. Duncan, Otto Hyink & Peter K. Dearden have shown how the queen activates a biological pathway in workers to achieve this.

The difference between the queen's and worker's reproductive organs are determined at the larval stage and is the result of the differences in the larvae's nutrition; The queen is fed exclusively on royal jelly. The worker bee has a much smaller reproductive capacity than the queen and they also lack a spermatheca (an organ used to store and deposit sperm).

The scientists have published their results in Nature Communications and have identified an ancient cell-signalling pathway, Notch cell signalling as the mechanism for suppressing the worker's reproduction. Notch cell signalling is involved in the development of tissues in all animals, including humans where it is involved in the development of our nervous system. They have demonstrated that a suppression of this signalling can overcome the effects of QMP on the workers and also that the absence of the queen results in a degradation of the Notch receptor in worker bees.

Newly emerged workers were either given a Notch signal inhibitor, DAPT, or a control substance for 10 days when both QMP was present and when it was not. Following treatment, the workers were dissected and the level of activity in their ovaries was given a score (0 to 3, with 3 given for the existence of fully developed eggs)

The scientists found that exposure to QMP reduced the number of workers with a score of 3 (those with fully developed eggs) from 28% to just 5%. They reported that they "..could overcome the inhibitory activity of QMP, at least partially, by treating bees with the inhibitor of Notch signalling DAPT. We observed that the proportion of bees scored as actively laying eggs (score=3) rose from 5% with just QMP to 15% in the presence of QMP and DAPT."

They were also able to measure a decrease in Notch signalling activity in the absence of QMP.

The experiments were performed in triplicate on three separate occasions (late summer, when laying workers are at their maximum) and show that Notch signalling plays a pivotal role in suppressing reproduction in the workers.