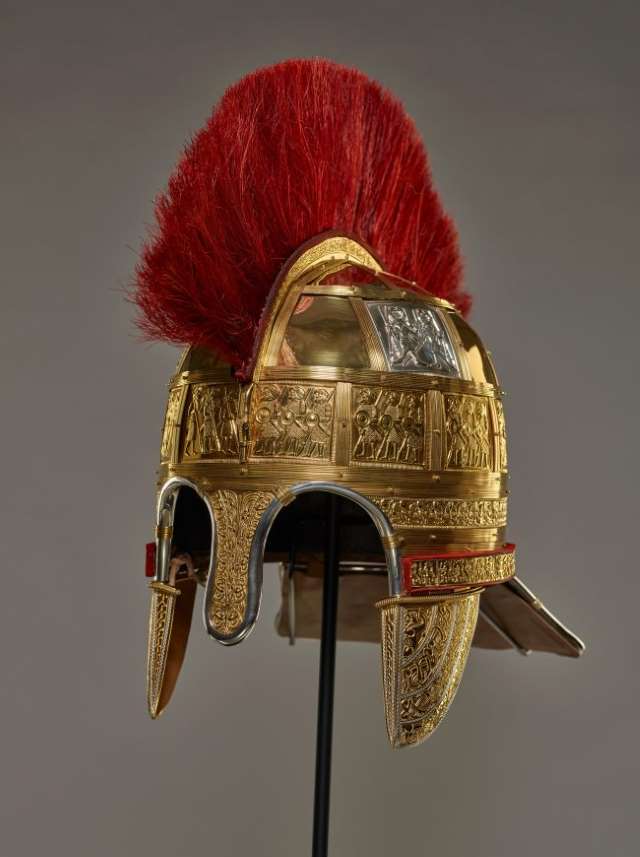 Rugby Beekeepers Association were approached in 2018 by Pieta Greaves of Drakon Heritage and Conservation. They were looking for local beeswax that could be used in a project focusing on reconstructions of a high-status helmet contained within the Staffordshire Hoard. The project aimed to showcase how the original may have looked and to provide valuable research on the methods used in its construction and evidence of beeswax was found in the original objects during research in both the crest and on the lower design panel.

The Staffordshire Hoard is the largest collection of Anglo-Saxon gold and silver ever discovered and it was found in a field near the village of Hammerwich, near Lichfield in Staffordshire, in 2009.

The very high status helmet, which constitutes approximately a third of the 4000+ pieces of the 7th century hoard was heavily damaged before it was buried but it was clear that the detail and bold crested design meant that the Staffordshire Hoard Helmet was likely to have had an important owner. Helmets of this period are incredibly rare - there are only five other Anglo-Saxon helmets known such as the Sutton Hoo helmet that is in the British Musuem.

Some major elements of the original helmet are missing though, including the steel base which provided the shape, and the surviving parts are too damaged and incomplete to reassemble the original physically. Instead, the project explored how the helmet may have been made and what it looked like, enabling archaeologists to understand its construction better and test theories about its structure and assembly.

The reconstructions have taken 18 months and were created by a team of specialist makers. The School of Jewellery at Birmingham City University led on the fabrication of the precious metal elements of the helmet. Laser scanning of the original objects was used to ensure the replica pieces are as close to the surviving original parts as possible. Other specialists, including Royal Oak Armoury, Gallybagger Leather, Drakon Heritage and Conservation and metalsmith Samantha Chilton, worked collaboratively to bring the helmet to life, advised by the archaeologists.

Steel, leather and horsehair elements were created, as well as the wood and paste, that scientific analysis of the original has revealed were used in its construction.

Rugby Beekeepers Association supplied beeswax in varying grades to Drakon Heritage and Conservation (a member of the reconstruction team) to aid in the experimentation in making the paste that was used to adhere the horsehair crest and the rendering process was documented and photographed for the benefit of the project's records.

Before it was used, the beeswax on the original helmet was also mixed with calcium carbonate and hoof glue to make a paste. It is thought that this contributed to the long-term properties of the paste and helped improve its flexibility and to stop the movement of pieces if the beeswax shrank or expanded as a result of environmental changes.